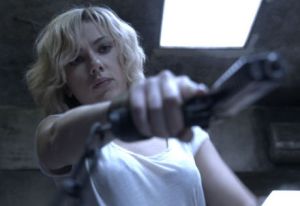 Luc Besson’s Lucy is a movie so high off its own concept that stuff like internal logic and storytelling ends up in the backseat. You know the clip you keep seeing in commercials for this movie, where Morgan Freeman shrugs and says, “I have no idea”? That’s more meta than Besson realizes. I recently caught Woody Allen’s Radio Days on TV, and Lucy reminded me of Danny Aiello’s rendering of Mia Farrow’s character: she’s nice to look at, but she ain’t got much upstairs.

It isn’t a help to the movie’s ancillary flaws that the entire premise is built upon a myth. Besson assumes a greater deal of truth to the notion that humans only use 10% of their brains than actually exists. According to that pesky fun-ruiner called science, we use the whole kit and caboodle just about every day. So that’s that, then. Still, I share John Ford’s opinion that “truth” should never take the place of a good story, and Besson’s concept–a young woman develops a superbrain that turns her into a human wizard–has plenty of promise. If Besson’s selective reading of Scientific American were the only plot hole, he might have gotten off scott free here. As far as holes go, however, Lucy is Blackburn, Lancashire. (If you got that reference, we’re best friends now.)

The new, awesome brain power granted to Lucy–an American in Taiwan played by Scarlett Johansson–comes from a drug. It’s got a clinical-sounding name that I can’t remember and it looks suspiciously like Heisenberg’s meth, only bluer. In the film’s excellent opening, Lucy is tricked into delivering a mysterious briefcase to a mysterious mob boss named Mr. Jang (Min-sik Choi). Jang sees a perfect drug mule in the poor, duped American, so Lucy is knocked out, cut open, and stuffed with a bag of blue. She’s to be shipped to an undisclosed location for the dropoff, but the bag breaks inside her when she’s beaten up by a gangster and then all hell breaks loose.

The powers that Lucy develops–and Johansson’s performance as she reckons with her new superbrain–provide most of the fun to be had here. When she bursts into a surgery in progress, wanting the blue bag removed from her intestine, she’s able to read the x-rays and deduce that the patient on the table isn’t going to make it, so she shoots him dead and instructs the doctor to get to work. She calls her mother from the operating table and has a batshit monologue in which she claims that she can feel the rotation of the earth, can feel her bones growing, can feel all things happening everywhere. It’s curious, then, that when her mom asks her what time it is, she says, “I don’t know. It’s night.”

For every visual step forward–Lucy telepathically changes her appearance, sees through human skin, gives nosebleeds to unsuspecting flight attendants, etc.–Besson takes two logical steps back. For all its world-altering power, Lucy’s superbrain behaves according to the laws of a plot that makes no effort to understand the science that it’s eschewing. For instance, in searching for the operating room, superbrain Lucy reads and understands the hospital signs even though they’re in Taiwanese, a language that pre-superbrain Lucy doesn’t speak. This calls into question the very function of a human brain. I’m no neurologist, but I think we can agree that the brain’s job is to understand, process and react to external stimuli; in other words, you only get out what you put in. Lucy’s early scenes on the drug show her strategic mind at work; she’s able to disarm her assailant and develop a plan of escape. All this is a reaction to her situation, made more immediate by her mutant fever brain. Well and good. But no brain, no matter how super duper metastasized, can just start knowing Taiwanese. Symbols that had no prior meaning for an individual can’t just suddenly reveal themselves. I buy it when Lucy uses her mind to void the bullets from a gun, because most humans understand the spatial relationship of the bullets to the gun; Lucy wouldn’t be able to telekinetically manipulate that relationship without some prior understanding of it.

Case in point: Lucy’s panicked reaction to the drug’s effects leads her to Professor Norman (Morgan Freeman), a neuroscientist specializing in brain enhancement research (or something). She becomes aware of Norman by speedreading (obvs) all of the brain enhancement research she can find on the internet. If we operate by the logic that the superbrain grants her access to the Taiwanese language without any prior education thereto, then why doesn’t she just know about Norman’s research?

Norman’s place in the plot is its own question mark. It’s unclear what exactly he can do for Lucy, since her superbrain seems to learn at several bajillion times the speed of Norman’s. Even if he’s the world’s top expert in the field, Lucy’s unparalleled brain power would enable her to do her own research and come to her own conclusions about how to deal with her unique affliction. And it’s especially unclear what Norman can do for her when we see that the comedown off the drug causes Lucy’s body to disintegrate, so she has to keep taking the drug to remain in her hyper-brain state and…hang on, I need an Excedrin.

Not all of the film’s problems stem from the faulty world-building. Some are just lapses in common sense. Why, for instance, doesn’t Mr. Jang juice up his henchmen with the drug so they won’t look as silly as the Crazy 88 when trying to take Lucy down? And why, when there’s so much trippy fun to be had with Lucy’s advanced brain potential, has Besson reduced the movie to a we-gotta-get-the-stuff action procedural? At various points in the film, Lucy travels through time, grows extra limbs, and turns herself into some sort of sentient supercomputer. Wouldn’t these (literally) mindblowing abilities be better served by a more cerebral movie? Instead we get the same chases and shootouts that have been paying Besson’s bills since the early ’90s. You wonder what a sci-fi auteur like Spike Jonze or Michel Gondry could have done with this material.

The missed opportunities here are too many to name. Lucy looks great, and has some imaginative touches, but Besson doesn’t trust his concept enough to follow it. He’s distracted by bullets and blood when he should be enjoying the adventures of Scarlett’s superbrain.