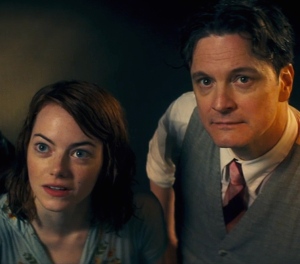 Sitting down to watch Magic in the Moonlight, I’ve got my Woody Allen checklist ready:

-A plot that fits on a paper napkin? Check.

-A general lack of non-whites? Check.

-A harmonious marriage of pessimism and dry humor? Check.

That Magic in the Moonlight is set in the early part of the last century brings the Woody Allen-ness of the movie into deep focus. For almost fifty years, Allen’s attitude toward filmmaking has been like that of the major studios during Hollywood’s first Golden Age: simple stories, filmed quickly and released with only a modest amount of fanfare. To call him America’s most prolific filmmaker is almost too obvious, and in fact it misses the point entirely. In Woody’s world, movies are work; there’s no need to make a big deal about them, because each one is merely a single unit in a stampede of Hollywood product. Filmmaking is a job, like plumbing toilets or selling tallises. Woody Allen is like the shark that Alvy Singer refers to in Annie Hall: if he ever stops working, we’ll know he’s dead.

In this vein, Woody shares the distinction retroactively applied to Golden Age greats like John Ford and Frank Capra. Woody’s movies never (or never seem to) set out to be great. If anything, his scripts are often formulaic and chock full of verbal exposition (check!). Even his masterpieces are unobtrusive, borne of the same assembly line where his lesser known films are cobbled together. His successes, then, are nothing more than the results of the veteran worker being good at his job. There’s not much difference between Midnight in Paris and, say, The Curse of the Jade Scorpion, other than that the former happened to find the writer/director at the top of his game. Because he works constantly, most Woody Allen movies exist somewhere between those two extremes: they’re light, easily digestible, and thoroughly okay.

And it’s in this middle ground that we find Magic in the Moonlight, a satisfying apertif of a movie that goes as quietly as it came, neither subverting nor disappointing our expectations but hitting the spot all the same. Like the bulk of the Woody Allen catalogue, it works without trying too hard, and gets ample support from a cast that always seems perfectly comfortable navigating the material.

Colin Firth is a magician named Stanley who performs across 1920s Europe under heavy (and heavily racist) makeup as Wei Ling Soo—as if performing magic weren’t a satisfying enough way to dupe an audience. He’s also a misanthrope who detests nothing more than to be duped himself. His match, then, must come at the hands of that most maddening of so-called “gifted” persons, the spiritual medium. It doesn’t hurt that the medium comes in the charming person of Sophie Baker—who, with the big eyes and pale skin and twiggy frame of one Emma Stone, would have found a comfortable home on the silent screens of the era were she not holding séances all over the French Riviera. When an old friend of Stanley’s (Simon McBurney) is stumped by Sophie’s purported abilities, he uses a dash of that famous Woody Allen verbal exposition (“You are the greatest debunker of fake psychics in the world”) to entice the magician to come and see what all the fuss is about, and to covertly dust for evidence of chicanery.

Alas, Sophie is too quick for even the Colin Firthiest of Colin Firth characters. He’s thoroughly bamboozled by her apparent clairvoyance, and she’s taken by his distinctly English charm. They have an easy chemistry—which is kind of weird, since Stone is less than half Firth’s age, but such concerns are out-of-place here. Apart from the fact that Firth’s dashing Britishness knows no age, Magic feels less like a period piece than a piece from the period. It has the subdued tone and efficient plot of a ‘30s screwball comedy. Those were the days when a wisecracking old fart like Groucho Marx could cavort with a young sexpot like Thelma Todd with no questions asked. We don’t question their budding romance, and neither does Sophie, whose nerves have likely been exhausted by the wealthy and aggressively harmless rube (Hamish Linklater, also the dastardly Jerry Dantana on HBO’s The Newsroom) who fawns over her, serenading her with a ukulele (ugh) and even proposing marriage.

Stanley, however, is somehow oblivious to Sophie’s interest in him. One of the movie’s quiet strokes of genius is in how it grants Firth’s Stanley the license to be as scathing and sarcastic as the most caustic of Woody neurotics (most memorable in recent years is Larry David as a curmudgeonly chess instructor in Whatever Works) yet makes him blissfully ignorant of the obvious. Sophie makes no attempt to hide her attraction, but Stanley is too in love with himself to notice. Rather than seizing Sophie in his arms (he is given more than one opportunity for this) he congratulates himself for his open-mindedness in recognizing her psychic abilities.

I wonder if Woody has lately been using his protagonists to quarrel with his long-held prejudices. His legacy has been that of the leftist whose atheism is equaled only by his hopelessness. In his drearier movies—1989’s Crimes and Misdemeanors, 2005’s Match Point­—it’s not just God that’s dead but morality writ large. It’s a cold, chaotic universe in these movies, where the best thing you can be is lucky, because good intentions lead to you-know-where. There’s no magic. Even in lighter fare—the magic-realism comedy The Purple Rose of Cairo (1985), the erotic farce of Vicky Christina Barcelona (2008)—whimsy can’t hold a candle to boring old reason.

In this context, Magic reveals itself as perhaps Woody’s most (gulp) optimistic movie since 1982’s forgettable (and all but forgotten) A Midsummer Night’s Sex Comedy. The movie buys into Sophie’s shtick only as far as the plot requires, but it recognizes the real magic at work in human relationships. It’s the straightforward romantic comedy that Woody has always been capable of but had never actually made until now. Love is rarely taken seriously even in the lightest of Allen’s comedies. (Indeed, many of his best movies focus on the retrospectively hilarious ways in which relationships fall apart.) Magic is the indulgent dessert that comes after the meaty main course of Blue Jasmine. It’s a welcome diversion, and having seen it I’m once again ready for Woody to amp up the pessimism. I doubt very much that I’ll be disappointed.