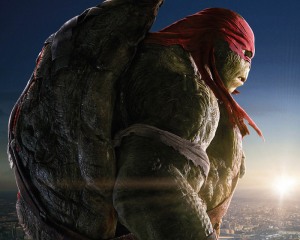 Before I get to talking about the latest attempt at a Teenage Mutant Ninja Turtles movie, here’s a quick rundown of the new movies I didn’t see last weekend:

Considering the options, I was confident in my decision to spend my weekend movie money on crime-fighting turtles. As un-promising as the reviews were (and boy, did they un-promise) I was sure that, if nothing else, nostalgia and low expectations would carry me through Teenage Mutant Ninja Turtles.

And they did…sort of. The problem (one of many) with rebooting old franchises in 2014 is that the advances in special effects often distract the filmmakers, causing them to forget the appeal of the source material. What I loved about the Ninja Turtles when I was a kid was the behavior of the Turtles and their conflicting personalities. The most memorable scenes from the first movie (also named Teenage Mutant Ninja Turtles, from way back in 1990) are not fight sequences, but scenes of bickering, goofing off, and slicing pizza with kitanas. The Turtles were jackasses, sure, but that only means that they behaved the way most movie teenagers behaved circa 1990. Besides, who doesn’t love pizza?

The new TMNT, however, reduces each turtle to his most obvious characteristic. Michaelangelo is still the token goofball, but the filmmakers seem to think that, in 2014, “goofball” translates to “creepy douchebag.” Donatello has his gadgets and little else. Raphael bitches and threatens to “go out on his own,” but we have no idea why his relationship with the other Turtles–especially Leonardo–is so strained. Leonardo is supposed to be the leader, but younger audiences, unfamiliar with the Ninja Turtles of old, would probably not glean as much from this movie, which barely gives ten lines of dialogue to poor Leo. That’s especially strange since the voice of Leonardo is provided by Johnny Knoxville. Either Knoxville has fallen on hard times or the studio overpaid for what is essentially a character role.

Of course, none of these characters are characters, really. They’re walking tropes, behaving according to the needs of the plot. We have the ambitious young reporter (April O’Neil, played inexplicably by Megan Fox), desperate to get the scoop that will earn the respect of her peers. There’s the newsroom chief (Whoopi Goldberg for some reason) who insists April should stick to what she’s best at, i.e. puff pieces, and doesn’t believe her crazy stories about mutant turtles beating up bad guys. There’s the guy who works for the city and has some sanctimonious speech about all the good he’s going to do for the people of New York, so you know he’s going to wind up being the bad guy. In this movie he’s played by William Fitchner, who’s carved out a fine career for himself playing authority figures and magnificent creeps. Fitchner has a natural bad guy face; it’s not that he’s bad-looking, but you can tell just by looking at him that he’s probably going to be the bad guy in whatever movie you’re watching. He’s like Jeremy Irons. Oh, and then there’s the even badder bad guy who the slightly less bad guy is working for, because of course it’s all part of some shadow conspiracy to “reclaim veek-tory” over the city of New York, even though no one knows why veek-tory is so important, or in what way the dispersal of a toxic chemical over the entire city (yep, it’s one of those plots) could possibly benefit Fitchner and his boss, the Shredder.

Remember Shredder? The badass, metal-clad villain from your childhood? He’s barely there in this movie. Like, literally. He spends the first eighty or so minutes of the movie out of his costume, a bald man photographed entirely in shadow, like Marlon Brando in Apocalypse Now. He shows up for a couple fights (including the requisite Fight To The Finish that ends the movie) but for the most part he’s sitting around imparting instructions to the Foot Clan, his army of loyal, mostly silent henchmen.

And then there are the Turtles themselves, who for some reason don’t show up until about twenty minutes into the movie. Director Jonathan Liebesman and his trio of screenwriters have invested way too much in everyone’s backstory to keep the plot moving forward. The exposition alone is exhausting as we get not only the origin story of the Turtles and their ninja master, Splinter (a mutated rat who somehow finds an arsenal of weapons just laying around in the New York sewer system), but those of Fox’s April and Fitchner’s Eric Sacks. This is the error so masterfully avoided by last week’s blockbuster, Guardians of the Galaxy. That movie’s director, James Gunn, realized that it’s less interesting to learn about how a talking raccoon and a humanoid tree came into being than it is to watch them in action. Liebesman, on the other hand, gives Splinter an expository monologue that likely contains more words than are spoken by the four Turtles combined during the entire movie. For a supposed action movie, Liebesman does a lot more telling than showing here.

So I guess it’s not surprising that the action sequences are what bring the movie to something resembling life. Obviously there’s lots of movement and noise and near-misses, but what’s really attractive about these sequences is that it’s where the Turtles are finally able to have fun. Because the movie is (unfortunately) told from April’s point of view, the already muted personalities of the Turtles are, for most of the movie, limited to Donatello’s nerdspeak and a few Michaelangelo doucheisms. The action scenes—particularly one adrenaline-fueled (literally) freefall down a snowy mountain cliff—find the Turtles at their zaniest, fighting the fight as the plot requires, but also reveling in the rush.

But that’s the most a movie like this can offer, because although the Turtles are armed with blades and bludgeoning tools, this movie is rated PG-13, which means that those weapons are mostly for show. There’s no blood, and the ninja abilities of our heroes are mostly used for punching and kicking bad guys into drywall. I guess all this is beside the point for a movie that has the opportunity to engage in all kinds of Turtle action but instead focuses on Megan Fox doing her best “what’s going on here?” face and running around in the tightest of all possible jeans. The best character here belongs to Will Arnett as the obligatory Guy Who Drives The News Van. He’s the funniest character—human or reptile—onscreen, but he’s also the most useless from the point of view of the plot. I guess maybe April doesn’t have a car? I don’t know. I don’t really care about her in the first place, and that’s the source of most of this movie’s problems.