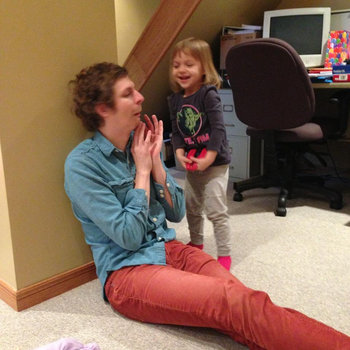 Well there’s no point in burying the lede: Michael Cera has released a surprise album called true that on BandCamp for some reason. No shit. Here, listen to it. Told ya.

Obviously, there’s a lot that needs to be sorted out here, so let’s get right to it.

Excellent question, and one that was much on my mind when I saw this item on my Facebook trending bar. First–and I’d forgotten all about this–but this is not Cera’s first foray into music. And no, I’m not counting that adorable song at the end of Juno, nor am I alluding to his stunning a capella rendition of a Guess Who classic in Superbad. Way back in 2010, Cera went the full Dogstar and became the touring bassist for indie supergroup Mister Heavenly. Again, I shit you not, see for yourself. Mister Heavenly contained members of The Unicorns, Man Man and Modest Mouse, and toured (with Cera) in late 2010 as a supporting act for Passion Pit. (Funniest part of Mister Heavenly’s Wikipedia page: The quotes around the word “supergroup.”)

I guess this could be seen as a natural progression from Cera’s role in Scott Pilgrim vs. The World, but I think what’s coolest about the Mister Heavenly gig is that it’s a decidedly low-key career move. Hell, it’s not even a career move. It’s a fun thing to do that Michael Cera did without making a big deal out of it. Which is probably why I quickly forgot about it and replaced my indie-rocking image of Cera with his coke-swilling, turbo-douche persona from This is the End.

Cera, it seems, is a man of many passions. For instance, did you know he has a YouTube comedy channel with Reggie Watts, Tim & Eric, and Sarah Silverman? Yeah. Wikipedia is a wonderful thing. Cera writes, directs and stars in many of the shorts featured here.

What we’ve learned about Michael Cera from this whole true that business is that he’s just a guy who does whatever TF he wants. Cera follows his muse wherever she goes. True that.

The tags that Cera has applied to the album’s BandCamp page include “alternative,” “dirty,” “home recording” and, perhaps ironically, “modest.” I’ll say this: it’s certainly no vanity project, at least not in the sense typically applied to celebrities. These songs legitimately sound like they were recorded on an old four-track in someone’s basement. And Cera seems unconcerned with highlighting any singular aspect of his talent. These aren’t full-band tracks, nor do I even feel accurate calling them “songs.” Many are instrumental, and only about half are over two minutes long. The tracks are mostly aimless jams over a central riff. Aimless is maybe the wrong word, but they’re relaxed, lethargic even. When it’s not gently-strummed guitar it’s gently-tickled piano and keyboard. It’s mellow to the mellow-th power. When he does sing, Cera’s double-tracked vocals sound like a happy marriage between Ray Davies and the late Elliott Smith. I almost wonder if he’s trying to put on an affect, yet nothing seems forced here. All is very, very chill.

It is, actually! There’s nothing I’d call groundbreaking on the first or second listen, but true that offers the same kind of pleasure that a Kurt Vile album does, which is to say that it doesn’t demand approval; its worth is based on its breeziness and its refusal to give a single care. It’s an album of excellent reading music, basically, and I’m sure that’s just fine with Cera. There’s little ambition here, but even less pretense. That’s a disarming quality, especially coming from a movie star moonlighting as a musician. There’s no latent need to be liked here. It’s kind of awesome that way.

So anyway, yeah. Michael Cera made a pretty decent bedroom pop album. I don’t think he cares if I like it, but I do.