Earlier this week, the TV gods blessed us with a gift: the first look at the new season of Orange is the New Black! Though we’re two months away from getting the real thing, this gift provides us with a fix of our favorite inmates from Litchfield, as well as a glimpse of what of our friends will be up to in the third season. Like an inmate getting a cavity search, it seems only fitting to examine the trailer for a  shot-by-shot analysis (along with my commentary). After all, there’s little else to do until June 12! 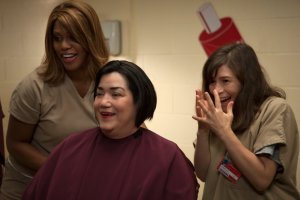 O.M.G. My excitement cannot be contained! From the song, to the hashtags, to the usual DGAF attitude of our friends at Litchfield, Orange is the New Black is coming back with a vengeance.

Among all the familiar faces in the trailer, it is worth noting that some are missing: Janae, Soso, Pornstache, Larry and Polly. Both Pornstache and Larry were confirmed earlier this year as not returning in season three. As for Polly, if her new beau won’t appear this season, she likely won’t either. I can do without Soso, and her sentence probably wasn’t long in the first place, but I do hope Janae will still be around.

If the trailer is any indication, Orange is the New Black is just getting better with age. All we have left to do now is binge watch the first two seasons and count down the days!