When one becomes invested in a television show, one needs to remember names. That’s what I tried to do when I started watching Game of Thrones, but it didn’t take long for me to realize that was utterly pointless; once I learned someone’s name they’d die. The death of Robert Baratheon was the catalyst for a dozen would-be rulers whose names I hardly remember to vie for their “rightful” place on the Iron Throne and kill a lot of other people whose names I hardly remember in the process. You’d figure with more people fighting to get their tushes on the most uncomfortable chair ever, the more complicated everything would be. But the premiere of season five shows us it is the opposite. Once you start remembering everyone’s name, shit is about to get real in Westeros.

The pool of Iron Throne competitors is thinning, and “The Wars to Come” made me realize it has been for some time. Ever more, Game of Thrones feels like exactly what it is: a game. Jon Arryn’s murder dropped the board and Robert’s death set the pieces. With the field of competition thinned out, the most strategic moves are now being plotted. (Arguably, a very strategic move was made when Joffrey was poisoned, but it’s pretty clear he was just a dick so he needed to go.)

In the finale of last season, Varys saved Tyrion from certain death, then carted him around in a crate for a however long it takes to grow a full beard, because he knew Tyrion would be useful. Not as a leader, necessarily, but as a hand to move the pieces. Varys has always been in King’s Landing, but he’s never been exactly loyal to the Lannisters, or anyone but himself, for that matter. Varys has proven himself to be the least impulsive character on this show. He thinks with his head, not with whatever hand is holding the sword, and understands that now is the time to pick a side. And not just the side that will benefit him in the short term (which is likely what he was doing with the Lannisters) but the side that will benefit everyone in the grand scheme of it all.

Varys doesn’t just want to lay low anymore. He is taking the most calculated step forward in securing a good future for Westeros; one that is peaceful and prosperous, and one where “the powerful do not prey on the powerless.” In a show where all anyone has talked about for four seasons is the impending doom of winter, this is likely the most hopeful thing anyone has ever said. And he’s referring to a woman. A woman that is definitely not Cersei.

That was the second reference to a woman more powerful than Cersei this week. The episode began with a flashback of young Cersei (just as domineering as she is now, not surprisingly) seeking out a fortune teller, who inevitably tells her, after ingesting some royal blood, that she will be usurped by another woman. Initially, you imagine Margaery’s smirk in your head. But with the knowledge that Varys is going to seek out a female ruler to follow, suddenly there’s a head of silver hair in your mind’s eye.

Even still, I think Margaery will be Cersei’s downfall. She’s already seducing Tommen (as much as you can legally seduce an adolescent, I guess) and she is even more sly than Cersei gives her credit for. Margaery’s word for Cersei’s fate is a vague, “Perhaps.” Perhaps Cersei will concede, perhaps Cersei will be less of a bitch. Perhaps Cersei will live. Margaery’s careful plotting means she conducts her business with a high level of certainty, which is rare among anyone in Westeros at the moment. 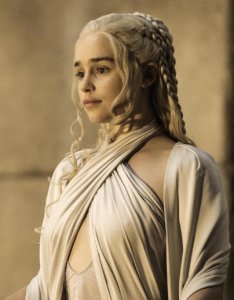 Over in Meereen, Daenerys is not certain of anything. Her rash decision making in previous seasons paid off in the immediate, but is now coming back to bite her in the ass. The former slaves are not much happier than the former masters. Her Unsullied are being cuddle-murdered by prostitutes working for dudes in gold masks. Her big dragon, Drogon, has been missing for weeks. As for the dragons she’s kept underground, they are big and they are PISSED. Who could blame them? I’d be pissed at my mom too if she chained me up and locked me in my room for an undefined measure of time. (Has anyone else noticed a time irregularity here? Tywin’s funeral is going on at King’s Landing, but the dragons are at least twice the size they were when we last saw them. How long does it take to have a funeral in Westeros? Alternatively, how fast do dragons grow?)

Dany was counseled to begin showing her strength, but it’s difficult for her to do that with pissy (or missing) dragons. If Varys does plan to head to Meereen, maybe his little birds will bring him a book on how to train a dragon. (Are there Barnes & Nobles in Meereen?) But for now, it’s kinda nice to see her bumped down a peg. She was way too smug for way too long.

The title of Smuggest in All the Land has passed from Dany to Stannis, it seems. He gets an army with his loan from the Iron Bank and suddenly thinks he’s hot shit. Fair enough, he’s got a lot of enablers in his life (his wife, Davos, Melisandre), but it’s presumptuous to think the Wildlings will follow him just because he calls himself king, particularly now that he’s burned their king at the stake.

I can’t imagine that Stannis’ smugness will last. Without even considering the possibility that the Wildlings will revolt against him, Stannis has an enemy in the virtuous Jon Snow. Jon’s willingness to negotiate with Mance Rayder and his mercy arrow through the heart solidifies Jon position as the ultimate moral compass on Game of Thrones. Nearly every other character works in their own interest, when the endgame for Jon (and Varys and Tyrion now) is to make the world a just place, and kill as little people as possible in the process. Jon’s influence and intellect are going to battle Stannis’ pride and ruthlessness this season. I’m willing to bet if any of our Iron Throne contenders are going to die soon, it’ll be Stannis.

While most people on Game of Thrones work in their own interest, it’s hard to blame Sansa for doing so. Last season she finally took her life into her own hands by making the conscious decision to be the lady to Petyr Baelish’s lord. After four seasons of being Joffrey’s punching bag and everyone else’s pawn, you can’t not root for Sansa’s perseverance. All the same, she seemed bored as all hell up in the Eyrie. I’m sure she recognizes that boredom is better than constant fear of death, even if it does mean watching Robin flail around like an infant with a sword for hours. It seems pretty clear that Sansa is playing Littlefinger the way he played Lysa (and everyone else in Westeros, for that matter), and she may be the only person that can do so. He’s so blinded by his love for her that if Sansa betrays him, he’ll never see it coming. This storyline has met up with the storyline in the books, so where they’re going is completely up in the air. Maybe they’ll run into Brienne and Podrick!

Poor Podrick. He just wants to be useful. I do hope he proves his worth one of these days.

One person conspicuously missing from the premiere was Arya. Last we saw her, she was leaving the Hound to die and boarding a ship sailing to I have no idea where. She wanted to go to Castle Black and they were going someplace else (I’m not a book reader, can you tell?), and I’m not sure that her silver bartering chip granted her passage to the Wall. Arya’s journey is one of the most tragic on Game of Thrones, as her life on the run since Ned’s beheading has been one of lying, thievery and calculated vengeance. Granted, she didn’t have the best role model, but there’s little of the precocious little girl left in her, and I hope her developments in season five are more of mercy than murder.

Tyrion may be safe from death now, but his outlook on things to come is rather bleak: “The future is shit, just like the past.” While some gleams of hope are beginning to shine through Westeros, HBO wants Game of Thrones to go on for ten seasons. If we’re only in season five, shit is going to get much, much worse before it gets any better. (This episode is titled “The Wars to Come,” after all.) With all of the pieces in motion, however, I can’t imagine they’ll be killing off characters at the rate they used to in previous seasons. I hope not, anyway. I finally learned everyone’s name.