What does a maple log know about making donuts? 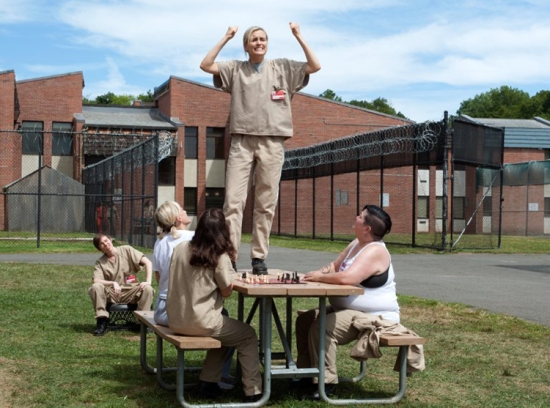 And now for something critical: what the hell happened here? Or, more diplomatically: why does season three, episode seven of Orange is the New Black feel so off? To be fair, there seemed to be a gradual downward trend happening since the season opener thanks to some static character development, but there were so many things in this episode that were just wrong. And it’s a shame! It had a really great title.

Alex’s backstory was a wasted opportunity that only accomplished cementing of her paranoia and mirroring the present-day action of Lolly’s creepiness. She’s sad about her mother dying, so she jets off to Paris on a coke and E-fueled binge and is a bad influence on her drug ring friend Fahri to the point that Kubra kills him… and I’m still not entirely sure why. “I have lots of friends. Remember that,” Kubra says to Alex in a line so obvious he may as well have been twirling his mustache. Everything in her backstory this episode was covered in season two, and to not spend this time developing another character was a misuse of valuable screen time.

Another misuse of time that’s already gotten tedious is this season’s focus on the bureaucracy of the privatized prison system. I get it. I got it in episode four when Caputo took the corporate bigwigs on a tour of Litchfield and all of their concerns were about money. I get it every time Danny and Caputo have a conversation. To have belabored the point to the extent that we’re now in a board room with executives pushing bullshit around the room is downright irresponsible, and the scene was as boring as it would be if we were sitting at that table. (If it weren’t for Cheryl’s inappropriate and hilarious outburst I’d call the whole thing a wash.) It’s not to say that the corporate hive mind isn’t worth commenting on; it is, just not to the extent at which it’s becoming a major theme.

More than anything, some odd directorial choices made this episode feel like it just didn’t fit into the beautiful puzzle that is this television show.  The shots that made up Alex’s psychedelic dancing montage were a filmmaking trope everyone’s seen a million times. In a more ridiculous montage, Pennsatucky and CO Coates feeding the ducks with donuts felt like it came from a bad romcom and it may as well have had Yakety Sax playing over it. And the absurdity of Piper’s panty monologue on the table in the yard with the “call to arms” musical underscore just doesn’t make sense in this show. Could it have fit in perfectly as a Jeff Winger speech from Community? Absolutely. But Orange is the New Black has absolutely nothing in common with a show as self-aware and charmingly ridiculous as Community. This episode was directed by one of the show’s producers, who tellingly has a mere two other directing credits to his name. (And, fortunately for us, it’s the only OINTB episode he’s directed.) It’s not entirely his fault, though; it’s obvious that some regrettable writing led to a less-than-great episode. Regardless, to say “Fear, and Other Smells” is derivative is putting it mildly.

RANDOM NOTES:
– Poor Daya. Her circumstances are unfortunate, but her plotline is just tiresome.
– Even more tiresome, the shared plotline of Gloria and Sophia. Can they have some personalities, please?
– As much as I wasn’t a fan of the treatment of Piper’s monologue, Taylor Schilling really went for it. Thanks to her it was moderately enjoyable.
– C.O. Coates has an interesting face. He’s kinda cute but he’s also kind of skeezy.
– Best line of the episode: “Washer and dryer in the building. Math tutor. Shit involving horses.”
– Close second: “What does a maple log know about making donuts?”