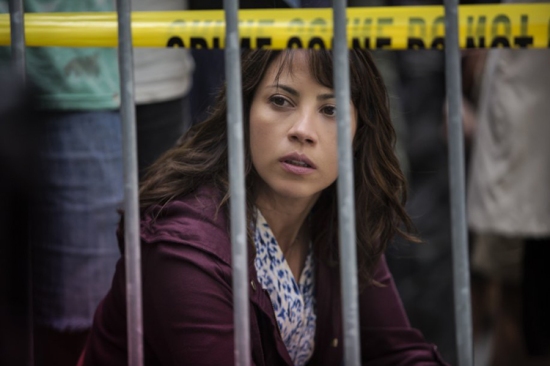 Following a tepid first episode, Fear the Walking Dead ambles its way through the first half of its second episode, then collects all the pieces in the second half to create something totally watchable through conflict almost on-par with its sister show. I wouldn’t blame anyone who is still skeptical of the show’s ultimate worth. But judging by its early focus on social deconstruction, it’s already building the framework of an effective stand-alone show that can serve to enhance the narrative of The Walking Dead, rather than exist in its shadow.

It’d be easy to say that highlighting the stand-off between police and dissidents is just something topical to throw into the story. Seeing Baltimore police in riot gear marching towards a crowd of people is something that was shown on the news only a few months ago, after all. But to feature it on Fear means it is a key element in how this world operates, and also how it will begin to fail.

Judging by the clean hole through his right eye, it’s likely that the police shot the homeless man “like twenty times” because he became a walker. But to the growing horde of people who witnessed the “murder,” it’s another example of senseless police brutality. At this point in the chronology, a person walking kind of funny isn’t much cause for concern, and the not-yet-decomposed walkers still look like normal people until you get close enough to see the darkening whites of their eyes. When Madison saw Artie in the hallway coming towards her, she (half-heartedly) assumed he was in some state of delirium. “We’re going to get you help, Artie,” she says, as though she can rouse him from whatever condition under which he’s suffering. It isn’t until someone comes close enough to see that an affected person is beyond help, and this is where the inexperienced people and the fresh walkers become valuable to Fear‘s setting.

But the mob’s distrust in the police force, particularly when viewing it through the lens of current events, is absolutely valid. These people, like those who have demonstrated in honor of Michael Brown or Freddie Gray, have come together to speak on behalf of those who have been silenced, even if it is an inconsequential homeless man. Since the police in the case of Fear are actually helping the citizens Los Angeles by killing this man, a cynical perspective could be that police are justified in their killing, which is a rather undesirable stance to take in an objective sense. However, that deep-seeded distrust will be a contribution to worse events to come: if the protestors weren’t skeptical about the motives of police then order could be maintained, but because police have shown severe lapses in judgement in the past, that skepticism causes people to rally against those that are in place to enforce the law. And if law is what creates and sustains a society, the lack of responsible law enforcement is a deep crack in a foundation that will cause society to come crashing down, just like we know it will.

Alternatively, in featuring the protest for the homeless man, Fear begins to create a social dichotomy in the wake of an apocalyptic event. There’s something uplifting about a group of people rallying together for the sake of one person; it’s a reassuring idea that people can come to the aid of others without expectation of anything in return. On the other hand, there’s a fend-for-yourself mentality that permeates desperate situations. People die on Black Friday, of all things, because a mental switch is flipped when one feels like someone else will get something they “need.” It’s the norm on The Walking Dead (particularly with the extreme example of Terminus), and even in its second episode it’s happening on this Fear. I felt an anxious itch in watching the police officer load those cases and jugs of water into his trunk. It’s like seeing the news feature a piece on a supermarket selling out of bread and milk in the wake of a hurricane; a panic sets in that you’re unprepared and need to get more for yourself or else you’ll be left with nothing. If armed with a sharp weapon, Madison could have very easily gone and helped her neighbor when a now-turned Pete attacked her. But this crisis mindset has already taken hold for her. People may have come together in solidarity for that homeless man, but it won’t be long until cooperation is completely gone. Like Tobias said, “When civilization ends, it ends fast.”

Speaking of that pimply kid, I incorrectly stated in the last recap that Nick was our door into this world, because it turns out that Tobias is our way in. The inclusion of Tobias as an amateur survivalist is such an important component to this show. In any other setting, he would look like a quirky conspiracy theorist that everyone laughs off as a loon, but in this show he is the embodiment of an audience that already knows more than the characters they’re watching. He already knows how beneficial it is to break into school to steal as many canned goods as he can roll on a cart, how crucial it is to carry a sharp object at all times, and how the unpopulated desert will be a good place to escape to. His survivalist instincts are a reflection of our prior knowledge to what’s about to happen. Madison can quip that she doesn’t need to hoard nonperishable items, but Tobias knows, and we know, how valuable those cans will become. We need his logical voice in this naive world.

Unfortunately, the bit of momentum stirred up from this episode may stall because of the holiday and we now have to wait two weeks until the next episode of Fear. But at this point, I’m in it. I want to know how Madison finds Travis amid the chaos. I want to see how the blended family dynamic will work, since Travis told Liza that he wants all of them to leave the city together. (We may know that they broke up, but we don’t know how they did. Was Madison a home wrecker?) But mostly, I want to watch how these characters cope as this world begins to falls apart. It sounds morbid, but what else are we here for?