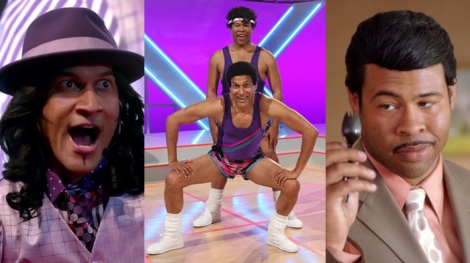 When concluding a television show, the sweet spot tends to be ending it somewhere between five and seven seasons. Any more than that, and a show can overstay its welcome. Any less, it must’ve been really shitty in the first place. It’s the best shows that hit that sweet spot and know how to go out on top. That said, I have to go on the record as saying it is ridiculously unfortunate that Key & Peele is ending after only five seasons. The show achieved the rare feat of consistently growing throughout its run then hitting its stride during its last season. Key & Peele maintained a candid and often subversive tone, and regularly took such weird turns that it transcended mainstream comedy… and it was always funny.

In tribute to the show, we have compiled a definitive ranking of the best deep track Key & Peele sketches. Why deep tracks? Because while Luther, the East/West Bowl, Meegan, The Valets and Substitute Teacher are worthy of the great praise they’ve received, the show presented us with many more examples of comedic excellence. But first, some superlatives:

Of the slew of guest appearances on Key & Peele, none are quite as wonderful as Ty Burrell playing a delightfully unaware Nazi commander. Featured twice in the series, Burrell’s brand of comedic tone and delivery fit in perfectly with Keegan and Jordan’s, and he could’ve easily slid in as a series regular. The cherry on top of the above sketch is the easter egg towards the end. Runner-up: Jason Schwartzman.

Key & Peele was never afraid of doing a sketch with no lines or dialogue, and they’re often some of the best ones. Found at the end of episode eight in season four, this sketch develops a complete joke with no words… AND it’s under a minute in length. A man has a cup of coffee by a window. As he reaches for a sugar subsitute, a nuclear bomb explodes in the distance. You can almost hear him saying “fuck it” as he proceeds to pour an exorbinant amount of sugar into his coffee while everyone else runs away screaming. Its circumstances are ridiculous but its theory is rational, and the laugh it delivers is very real.

There are very many musical sketches of note (“Shot in the Dick”, “Feminist Pirates”, “MC Mom”) but their take on “One Day More” from Les Miserables is a spot-on parody. It’s technically brilliant in its score and singing abilities as it points out the ridiculousness of the musical genre. “We could solve all of these issues if everyone just spoke one at a time!” Bonus points: Thomas Middleditch as Thenardier.

A cold open is the appetizer to the meal of the show, and this one is most delicious little nugget of comedy food. In the season three, episode four opening sketch, all-star point guard Charlie Sanders explains to a reporter the struggles he’s had throughout his life in dealing with adversity. An apt conversation piece, certainly, but Key & Peele elevates the concept and personifies it into Adversity Johnson, an insuffrable guy in a plastic jacket and purple shoes who will pluck out your arm hairs and drink all your water. Keegan’s bouncy ball energy and Jordan’s even-keeled and apologetic delivery work as the best kind of odd couple here. Try watching this and not screaming “DEAL WITH ME!” for the rest of the day.

Jordan is at his best when he has room to play, vocally and physically. In “Continental Breakfast,” he takes his enchanted businessman character on a journey of the senses, weaving throughout joy and pleasure and rapture until he arrives at an indefinite stay in the hotel. At first watch, the ultimate reference comes out of nowhere, but pay attention at the beginning of the sketch and you’ll hear he’s staying in room 237. Runner-up: Hype Man.

Keegan’s boundless energy is his greatest asset, and it’s never better than in “Aerobics Meltdown.” Throughout the entire sketch, he effortlessly performs the cheesiest of 80’s aerobics while his mega-watt grin slowly devolves into a grimace as he learns some bad news. These two doing aerobics is funny enough, but the technical achievement of Keegan’s performance is a master class in physical comedy.

It’s not hard to poke fun at professional athletes’ inept public speaking skills, and that’s why this sketch takes Charlie Sanders’ hyperbole as far as it’ll go, like in the sky or on the freeway. His proclamations resonate so deeply that the mere thought of the sketch will make you hear “You can fly!” in Jordan’s delivery, and an out-of-nowhere laugh is not far.

This sketch begins with foreboding music and shots that are directly reminiscent of The Walking Dead, then hits you with a joke so wonderfully unexpected that the sketch could’ve ended after a minute, but it continues to hammer in the joke’s implications in the most ludicrous ways. Also, Kevin Sorbo! What!

The social commentary on Key & Peele is unabashedly frank, and that commentary is synthesized in this sketch that explores the ridiculous nature of Confederate Civil War reenactors. In the premiere episode of the second season, Keegan and Jordan play along as slaves with the Confederate soldiers that are trying to preserve “the pure and beautiful slice of southern history.” It’s Michael-Scott-level uncomfortable, funny, and satisfying all at the same time.

Never has there been such a blunt and honest representation of a woman’s monthly shame (as Shirley would call it) as in this sketch, particularly one as funny as this is, and especially from a man’s perspective. I hesitate to say that I appreciate it to such a high degree simply because I happen to be female, because I really think this sketch stands on its own as one of the best they’ve ever done, but “Menstruation Orientation” can function as a touchstone of modern feminism. And it is just exquisite.

6. I Pooped My Pants (The Wire Parody)

Without even considering this sketch is a parody of The Wire, this sketch is the perfect example of Key & Peele‘s natural ability to explore the basest of infantile comedy and develop it into a two-minute-long masterpiece. It’s a refined poop joke that concludes with the perfect button. Apology accepted.

There are just some kids who will always be cooler than you, and joke-stealing Troy is that kid. The joke of this sketch is a one-liner taken to an unfortunate end for Joe, and it demonstrates a kind of sad humor that Key & Peele likes to explore. And damnit does Jordan utilize those braces.

4. Damn, Check That Shit Out

This sketch is exemplary of the comedic reversal that Key & Peele does so well. Just when you think you’re laughing at Jordan’s bizarre intonation and cluelessness, the joke turns on you and becomes something else entirely. Brilliance.

The phrase doesn’t mean anything. The chosen words do not make logical sense in the same phrase, especially since “chainwax” isn’t at all a real thing. But there is a rhythm and meter to the words when they’re put in conjunction with each other, and they create a string of syllables that rolls off the tongue in a very easy and pleasant way that it lends itself to becoming a common phrase. Particularly so when put in such a painfully hilarious confrontational setting. It’ll catch on.

No material is too primitive for Key & Peele. They will attack it with a kind of deft intelligence that you would have never thought possible for a joke so basic. To turn the classic “something on your shirt” gag into a psychological thriller featuring two grown men is the zenith of comedy. Even when the brief clip of the nose flick is featured in the seasons four and five opening credits, I laugh every time.

Key & Peele‘s approach to the subjects of their sketches is an adept skill of theirs, but “Prepared for Terries” features every single comedic talent at which they’ve excelled: a concept never before imagined, a willingness to explore every corner of their characters, the masterful way they utilize their faces, and their exceptional ability to work together as a comedy duo. Always on the same wave length, Keegan and Jordan have found a way to weave in between each other’s performances, creating something that heightens their work as a pair and as individual comedians. “Prepared for Terries” has a kind of wordplay (complete with popular actors’ names utilized as verbs) that should be a part of an intensive study on improvisation. And how can you go wrong with the hair here, facial and otherwise? There has never been a piece of comedy like this, and there never will be again, and I will never be able to unhear “with great power, comes great respronsatrilitrance.”