Killers Within These Walls: Thoughts on the Season 6 Premiere of ‘The Walking Dead’ (“First Time Again”) 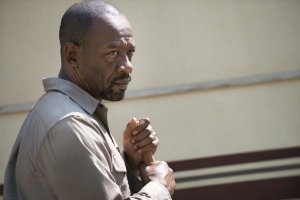 My friends and I argue about The Walking Dead far more than we argue about anything important. Part of that is my fault, probably. For one thing I don’t pay nearly as much attention to the news as I ought to, and for another I apply way too much metaphorical significance to zombie-centric TV programs to take them anything other than dead goddamn seriously. I’ve drunkenly shouted my feelings about the moral implications of this show more times than I’m comfortable trying to remember and with more vitriolic passion than I’ve ever had for any sort of political or ideological stance. And still I lose these arguments far more often than I win, mostly because I get so fired up that I promptly stop making sense, but also because I’m still struggling with the same inconvenient truth faced by Morgan in the season six opener, “First Time Again”: that morals were all well and good in the old world, but in the zombie apocalypse they simply don’t fit.

Possibly the greatest point of contention between my friends and I has to do with the Grady Memorial Hospital plotline that brought the first half of season five to a screeching (yet, IMHO, compelling) halt. Many of our disagreements about this diversion–they hate it, I like it–can likely be blamed on the different ways in which we absorb serialized drama in the digital age. Whereas I bingewatched the first half of season five, they watched it in real time, meaning they were waiting a full week between episodes; after feeling the rush of the fall of Terminus and its immediate aftermath, I can see how they’d feel let down by getting dragged off to spend time with a minor character in an admittedly sterile environment. But more to the point is their argument that the hospital story seemed to have no lasting implications for the series, other than the death of Beth (who was never terribly important to begin with) and the addition of Noah (who in turn was killed only a few episodes later). Argue as I might for the pure dramatic merit of the hospital episodes, I never could think of a good comeback for this one. But I think I have one now, though time and my dubious arguing skills will tell whether or not it actually makes any sense.

It seems to me that Rick is becoming Dawn.

Remember Dawn? The humorless frau who ran the hospital with an iron fist and a pair of deluded bug-eyes? I always found Dawn to be the most fascinating of TWD‘s would-be despots. Sure she didn’t have the firepower or the misdirecting charm of the Governor, but it was that very unabashed militarism that made the hospital such a terrifying place. Where Woodbury and Terminus used smiling facades to lure unsuspecting travelers to their fortified chambers of delusion and death, Grady Memorial was a stonefaced den of murder and slavery, where the strong were euthanized (lest they try to fight back against the infallible System) and the weak were kept alive only to be debased into free labor. Dawn’s vision of a brave new world required people like Beth and Noah to exist for the sole purpose of keeping the machine running, and the machine only needed to survive because it belonged to Dawn. “Some people just aren’t cut out for this world,” she once said to Beth, possibly the bleakest view of human life theretofore expressed on the show, and that’s saying something. Even the Ricktatorship allowed for an equal division of labor, as long as everyone learned to use weapons. In Dawn’s view there were two kinds of people: those in charge, and those who could just as easily be cast into the furnace as soon as the need for manual labor dried up.

Now see Rick, the embittered Patton figure, drawn to leadership by his own Darwinian alpha-tendencies rather than any sense of duty. It’s true that he knows what needs to be done–and sure enough the Woodstock-like craterful of walkers gives him an excellent opportunity to wield his tactical genius–but “First Time Again” forces us to see Rick through Morgan’s eyes, and what Morgan sees is a dangerously mixed message. Each of Rick’s forays into questionable moral terrain in this episode happen with Morgan standing not quite apart, like a disappointed and disillusioned angel on our fearless (if nothing else) leader’s shoulder. I’m glad the series didn’t waste time getting Morgan settled and instead jumped right into the mission at hand (though the mission was forced by its very nature to move at the tedious, lumbering pace of the walkers). This requires Morgan to deal with his mixed feelings about Rick’s leadership in fits and starts rather than in well-organized monologues. When Rick dispassionately resolves to leave Pete’s body to the elements–his command that “we won’t bury killers within these walls” sounding very much like the words of a myopic pot to an undefended kettle–Morgan attempts to bring Rick down to earth by reminding him that he, too, is a killer–as is Morgan himself, as are so many people these days so really what’s the point of casting that kind of judgment, especially on the dead? Yeah, that could’ve and maybe even should’ve been a hell of a speech, but it was met by Rick with silence and the slamming of the trunk on Pete’s corpse, because as we know, this isn’t a democracy, and when Rick says the conversation is closed you better believe the goddamn conversation is goddamn closed, moral ambiguity or no. 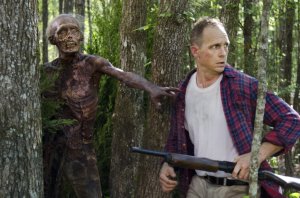 The Dawn-like ideology of the Ricktator comes to the fore when he shares his own snippet of monologue regarding poor Carter (played by former Oneders bassist and Purple Heart recipient Ethan Embry). It was inevitable that Carter’s big idea for disposing of Rick would deflate itself; not a one among the Alexandrians was interested in his too-simple plan of Rickicide, probably knowing that even if they didn’t crave Rick’s no-nonsense leadership, killing him is no solution at all, what with Deanna Monroe peeking morosely out from Rick’s pocket and the whole Georgia regiment bound together like a marine unit. After Rick comes oh-so-close to killing Carter (who really should’ve posted a lookout) he confesses to Morgan that he would’ve killed him if he hadn’t deduced in that very moment that people like Carter just won’t make it in this world. So we see again Dawn’s division of humanity: the almighty Us, who have earned our place in the new world with battle-hardened machismo, and Them, who can either follow or get out of the way because if Rick isn’t a leader–the only leader–then who is he?

Fair enough, Rick’s “we take care of our own” posturing is nothing new. And the inevitable quasi-mercy killing of Carter that closes “First Time Again” is certainly not the first time Rick’s killed someone for inconveniencing him. Still, his tribal ideology seems to be reaching its zenith in this new season. His bloodlust is no longer the simple cocktail of vengeance and self-preservation it once was. You can defend just about all his prior killings as acts of either necessity or righteous retribution, up to and possibly including Pete. But Pete poses a problem, as does Carter. It’s not just that Pete killed Reg or that Carter pulled a gun on Eugene; it’s that Rick wanted to kill these guys, was indeed waiting with bated breath for an excuse to do so. (The actual killing of Carter isn’t as important in this context as the fact that he would’ve shot him back in Alexandria if Morgan’s judgy shadow hadn’t made him feel guilty.) Protecting the homestead is not nearly as important to Rick as making sure that everyone knows who’s boss. And any twentieth century dictator can tell you that it’s much easier to be the boss when you enforce population controls.

Consider Daryl’s dissent on the subject of recruiting runs. Daryl boasts the most outwardly nihilistic persona, but we all know that he’s a teddy bear underneath that silly angel wing vest and ’90s alt-rock haircut. He’d want you to think he’s as isolationist as Rick, but even Daryl Dixon knows that Alexandria can only grow stronger with greater numbers. He believes in community, where Rick only believes in his community. We can’t blame anyone for having trust issues in the zombie apocalypse, but at least Daryl understands that collaboration is the foundation upon which the civilizations of the old world were built. But a group of survivors serving only its own perpetuation is…well, it’s very Grady Memorial Hospital.

It’s hard to tell what the series has in mind for Morgan. He seemed at first to be the moral compass our group desperately needs if it’s to skirt self-immolation. And indeed he’s clearly struggling with the punishing reality of life with Grimes & Co. But as he stands agape over the corpse of Carter–who certainly was doomed from his bites anyway–we wonder whether he’s appalled at Rick’s actions or simply shocked into a new perspective. Probably a little bit of both, but I hope the show doesn’t place him complacently under Rick’s spell. Rick may be the best at getting things done, but a leader of his stubborn, iron will needs to be questioned. Remember that mysterious noise that closed the episode, luring the great horde of walkers terrifyingly off-course? That was the sound of Rick’s fallibility. You can prepare for everything, Mr. Grimes, until you can’t.