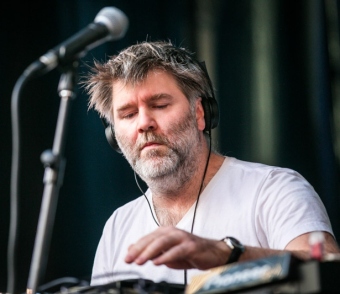 I’d love to be able to say that I heard the bells on Christmas Eve, but the truth is I was so preoccupied–by the holiday, by the eerily warm weather, by the streaming world’s attempt on that same day to launch Beatlemania Mach II–that it took me several days to even notice an inconspicuous single called “Christmas Will Break Your Heart” hanging out somewhere on the periphery of my Spotify page. The artist name read “LCD Soundsystem,” but I knew that couldn’t be right. LCD Soundsystem was dead, had been dead since 2011, their self-immolation so sudden and so grand it basically broke the entire concert ticket economy for a week or so. I’d watched their farewell concert from afar, via a Pitchfork livestream, and while sitting in my parents’ basement didn’t exactly make palpable the cultural and emotional weight of the moment, the band was at least gracious enough to play most of my favorite songs in the first set so I didn’t have to sit in front of my computer all night like a doofus.

Anyway, that was almost five years ago. James Murphy’s been scoring Noah Baumbach movies and opening wine bars and developing espresso blends, which are all very James Murphy things to do. Reforming LCD Soundsystem though? That’s not very James Murphy. For a guy as heart-on-sleeve as Murphy appears (seriously, between the self-consciously unassuming Courier font and Murphy’s borderline pretentious predilection for typing only in lower case, the LCD website looks and reads like a fucking LiveJournal) you’d think the notion of bowing out at the top of his game would be too tantalizingly poetic to double back on. The Christmas single was one thing; that could’ve just been a for-shits one-off sent out to tease the hyperventilating diehards. Even when the news broke that LCD would be reuniting to headline Coachella I was like, who cares? If you liked LCD Soundsystem at the peak of their powers, you’re probably too old or too domesticated (or both!) for festivals by now, and even if you’re not, the fact that this whole thing is happening alongside a very cloudy and not-necessarily-wanted Guns N’ Roses reunion sort of sucks the glory from the whole idea.

Okay, so they have this new single–which is basically just a seasonal reworking of “New York I Love You But You’re Bringing Me Down” anyway–and they’re playing a great big overpriced festival in the desert. That’s cool and all, but it’s not like they’re really, actually, for serial getting back together.

There will be a tour. There will be an album. There will be, for the first time since 2010, new songs from the band that never recorded a bad one. At the risk of doing that thing where you use the title of a band’s album as a “clever” double entendre in relation to news about the same band: This is happening.

(Oof, and this coming from the guy who just called James Murphy pretentious.)

Sorry, I guess all this news has me a little giddy. And to be sure I’m not alone; in a blog post on the LCD website (Murphily titled “let’s just start this thing finally with some clarity”) Murphy writes of being “blown away by the overwhelmingly positive response” to the news of the reunion from fans. But because this is the world, there are also people who are pissed. Pissed because that farewell concert–the concert that sold out Madison Square Garden in minutes, the concert whose tickets were bought in bulk by scalpers and resold at a profit, the concert that was so hard to get to that it necessitated four pre-farewell concerts the same week–well, I wouldn’t know watching from my parents’ basement, but I can only imagine that many of the kids who attended that concert had to travel pretty far and spend a shitload of money but would never have complained because it was supposed to be the last time. For the kids who, as Murphy puts it in his note, “found [the MSG show] to be an important moment for them, which now to them feels cheapened,” the news of this reunion a mere five years on must read like a great big gotcha. I’m trying to imagine myself as one of those lucky few who landed a ticket, making a pilgrimage to a celebration that was also billed as a funeral, one of those who’ve been spending the last few years saying “I was there” with pride–I mean, it’s hard not to be super cynical about this reunion now, right?

Murphy, of course, feels authentically shitty about this. Because Murphy, unlike most authors of rock songs, is exactly the person IRL that he is in his songs. He’s never wanted anything other than to play music with his friends and make people happy (and brew coffee). When the MSG fiasco happened, he added four extra shows because he felt so bad. He was the guy pleading “I Can Change” when pretty much everyone loved him the way he was. If one person in the crowd is unhappy, he’s unhappy. So to the fans who went to MSG and now feel betrayed by the sudden reunion, Murphy writes: “i’m seriously sorry.” Which has to make James Murphy the only motherfucker in the storied history of musical victory laps to actually apologize for reforming his beloved group.

Which, I have to admit, is a very James Murphy thing to do.

Only James goddamn Murphy would feel the need to explain each and every step of the thought process that led to his band’s reunion, as he does in the aforementioned blog post. So often in music we idolize people who “just don’t care.” Even in indie music, the fan-friendliest of imaginary genres, we get far more Mac Demarcos and Father John Mistys and (for the older crowd) Robert Pollards–aloof hedonists as concerned with pushing their brands of effortless cool as they are with writing killer rock songs–than James Murphys. Even unassuming and apparently introverted niche heroes like Rivers Cuomo have a bit of the “fuck you” pumping out of their otherwise sensitive hearts. Murphy was and is indie’s greatest populist, and that’s partially why he’s so great: his songs and his persona alike make us feel loved.

Murphy’s enlightened approach to the reunion is indicative of his love of doing the right thing. It would take a real emo screwball to cancel a reunion tour just because some folks are (understandably, if not justifiably) upset. But Murphy’s response shows his compassion and his self-awareness in equal measure:

it needs to be better than anything we’ve done before, in my mind, because it won’t have the help of being the first time. and we have to play better than we’ve ever played, frankly. every show has to be better than the best show we’ve played before for anyone to even say “well, that was good. i mean, not as good as they used to be. but, you know. it was good.”

It’s easy to be cynical, and sometimes it’s frankly hard not to be. But because Murphy’s humility has always been genuine, I feel sure that his promise to do the best he’s ever done is genuine too. It isn’t in Murphy’s DNA to let anybody down, at least not in his songs and in his performances. I can’t imagine being one of those kids who went out of their way for the MSG show right now, but I also can’t imagine not being fucking psyched for new LCD Soundsystem music. Could this one be the last time? I don’t know, and I don’t care just yet. All I know is that it’s here and it’s happening.