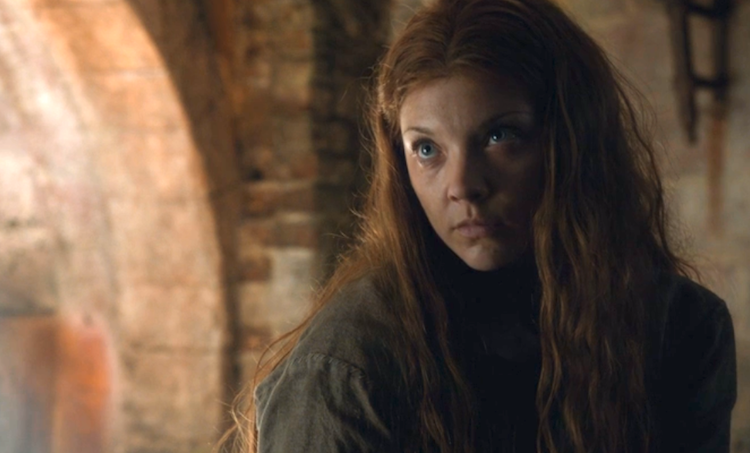 If anyone’s got more determination than Littlefinger it’s got to be Margaery. She’s been held prisoner in the sept for longer than Cersei was but still hasn’t cracked. She has the patience of a saint, and it’s a real shame the High Sparrow can’t see that as a redeeming godly quality. But since he sees the queen as a sinner in need of penance and redemption, it was her turn this week to listen to one of the High Sparrow’s tailor-made anecdotes.

He brings Margaery out of her cell to ask her where she’d go if she was able to leave in that moment. “I’d go to my brother, my husband, my family,” she replies without hesitation. But even the concept of having loved ones is something the High Sparrow finds fault in: “Of course, but for you, that means seeking out money, finery, power.” He tries to play good cop and backtracks slightly with a quick but I was just like you! Even if it is a bit of a weak tie-in, he’s able to use family as a segue to tell the story of how he became involved with the Faith Militant.

He recounts a tale about how his father was a simple cobbler, and when he died the High Sparrow took over and started making extravagant shoes so that the rich people would want them more. With the additional money made through his fancy footwear, the High Sparrow attempted to “buy a taste of their lives for myself.”

Now, it’s hard to say how much he knows about his prisoners, but this line really screams “Margaery,” even if she wouldn’t want to admit it. The Tyrells are a rich family, but they’re always in the position of marrying up. Let’s remember back when Renly died and she admitted to Littlefinger, “I don’t want to be a queen, I want to be the queen.” She’s really lived up to that ambition with – count ’em – three different kings under her belt. So as obnoxious as he may be, The High Sparrow may have a point. It’s not hard to argue that Margaery would seek out her family for the exact purpose of obtaining money, finery, and power.

It’s also hard to argue (to anyone who doesn’t have a seven-pointed star carved into their forehead) that opportunism is a valid reason to have someone imprisoned. But opportunism happens to be the High Sparrow’s root sin, so I guess Margaery’s sin hits close to home. He continues by saying he invited all his friends over for a raging orgy, only to wake up in the morning to see a pathetic group of wannabes, “the truth of their bodies laid bare,” and realized that this life he’d been chasing was just a “collection of lies.” Margaery convincingly lays it on thick, “So what did you do?” He left the party and never wore shoes again.

Margaery will go down in Game of Thrones lore, along with Littlefinger and Varys, as an expert at playing the long game. Whether the High Sparrow believes he struck a chord with her or it’s just another move in his manipulation game, he allows Margaery to go see Loras. No one seems to fare well in the cells under the Sept, but Loras is in worse shape than anyone. It’s not difficult to imagine he’s being beaten or tortured, because every time Margaery insists he needs to be strong he comes back with, “I just want it to stop,” or, “Let them win.” With little left to do but comfort her brother, Margaery relents.

But what she doesn’t know is that she now has an ally in an unexpected person. With young, impressionable Tommen making friends with the High Sparrow and listening to fucking Pycelle of all people, he tries to tell Cersei that they shouldn’t antagonize the Faith Militant for fear of what they would do to Margaery. Cersei’s quick to counter that argument with a reminder of what she went through, and throw in, “Margaery’s safety is paramount” for good measure.

At least Tommen isn’t naive enough to believe everything is copacetic with his wife and mother. He confirms his suspicions that Cersei doesn’t “care for” Margaery (let’s not forget it was the Queen Mother herself that conspired to have Margaery and Loras arrested), but Cersei’s eye for vengeance is no longer fixed on her wiley daughter-in-law. She’s the polar opposite of the High Sparrow, believing in continuing the social order and committed to preventing its degradation. Well, that, and she also wants to see the High Sparrow suffer as much or more than she did. Tommen divulges to his mother that she is to stand trial soon, but before that Margaery must do her walk of shame. In an epic twist of loyalty, Cersei now has a vested interest in Margaery’s wellbeing.

So Cersei and Jaime bust in on the Small Council meeting, as unwelcome as they are, and convince arch-rivals Kevan and Olenna to join forces and take the Faith Militant down. The royal army is to stand down and let the Tyrell troops invade before Margaery’s walk begins, so as not to seem like Tommen gave the order and risk the High Sparrow feeling like he’s been deceived by his close relationship with the king. Kevan warns that “the sparrows have many friends in this city,” and if their hoodwink goes awry then a civil war could erupt. But the risk of war is a small price to pay if Margaery’s humiliation is at stake. At once proving the selfishness of the higher classes and protecting her granddaughter, Olenna admits that many may die, but, “better them than us.”

Also from this episode:
Come and See Bad-Ass Sansa
The Cost of the Iron Price