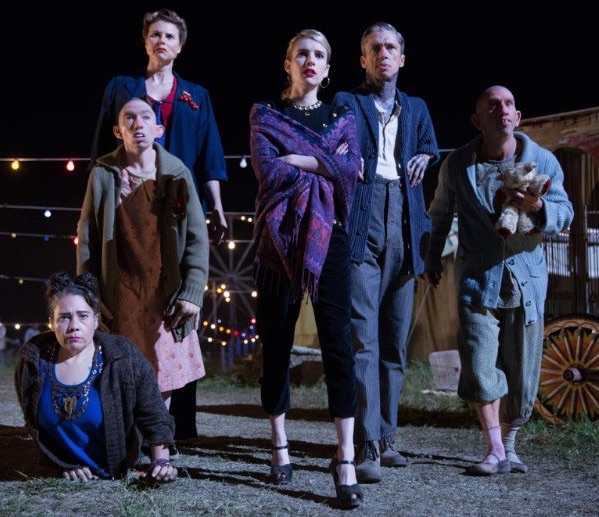 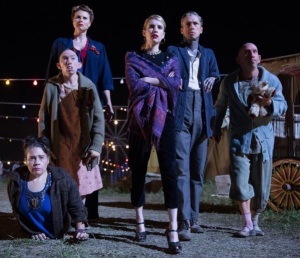 Now THAT is how you make television! This was by far the best episode of the season. The scenes flowed well, the storylines made sense, the shots were fun to watch. If this episode could be replicated twelve times, American Horror Story: Freak Show would’ve been a miniseries to reckon with.

It feels like the twins have finally come into their own! After eight episodes of being everyone’s prop, they were given the opportunity to really speak in this episode. After being moved into a remote tin shed for “safety” by Stanley and Elsa, they were told that the doctor responsible for the conjoined twin separation we heard about earlier in the season was going to operate on them. Stanley was behind the whole thing, of course, but facing the twins with the realization that they may actually be separated really gave some stakes to their story.

That, and it also pointed out what I’ve been thinking all season: IT CAN’T WORK! I mean, if you separate them, they’ll literally only have one side of their body. Like, they’ll each get an arm and a leg and… half a vagina? How does that work? They have separate lungs and hearts but nothing else! WHY DOESN’T ANYONE ELSE GET THIS?

Fortunately Bette brought this up, because I don’t think I could’ve handled any more denial of that plot hole.

But once Stanley and Elsa left to go pick up “the doctor,” Bette and Dot were able to talk it out. Dot still wanted the procedure because she wanted them both the chance to live a normal life. Bette didn’t want the procedure because she knows that one of them wouldn’t survive. Though we’ve known their motives for a while, this is the first opportunity the two have the time to actually consider the other’s reasons why. And through that what we get is some of the most honest moments of the entire season.

When Dot implores Bette to admit that she’s tired of their “infinite intolerable arranged marriage,” Bette recalls moments where the two of them have risen above the complications of their physical build and how they succeeded together. Bette considers their “arranged marriage” as a gift, and recognizes that the two have “endured a life that would’ve driven most people mad.”

In a show that’s full of heavy-handed expression and weakly delivered lines, Bette is gentle and utterly heartbreaking in this scene. She wears a smile throughout, and explains that if Dot is unhappy, Bette would do anything to make her happy, even if that means sacrificing her life so her sister could have a normal one. This scene is this season’s thesis: what is a boring, normal life when you can have a challenging, unique one?

So they mutually decide they’re not going to go through with the surgery. Even when they’re rejected by Jimmy at the end of the episode, they came so far in this episode that we know they’ll be alright.

Oh yeah, so drunk ass Jimmy. Just bumbling around, pissing everyone off except for Ima Wiggles. Jimmy feeds her and proceeds to pork her (sorry, I really couldn’t help myself) while Maggie and Desiree watch on.

Oh, Maggie. How boring you are. I’m not sure if her character sucks, or if I’m just now realizing I’m not a fan of Emma Roberts, but all of her scenes just drag. They just drag on the ground, collecting dirt as they go until the whole scene isn’t worth watching anymore. She doesn’t deliver lines so much as she recites them, and all of the scenes she’s in suffer for it.

You’d think Maggie would be more pissed that her love is super trashed and delving into the soft, rolling flab of Ima Wiggles. But she just stands there, arms crossed, gazing at what feels like a minor inconvenience to her. There’s no passion there. Just loudly recited lines.

After Jimmy’s done with Ima, he heads over to his old sexual stomping ground: the housewives’ tupperware party. Since he’s been drunk pretty much constantly, he keeps (ahem) missing (wink) and the rich white women are getting tired of being poked in a hole that’s still illegal in many states to poke.

As he stumbles into the living room to get some drunk snacks, Ethel appears, sitting on an accent chair like one of the gals. (And THAT is how you pull off being postmodern! I’m so glad they figured it out and haven’t seen a shitty 90s cover in a few episodes.) Jimmy runs over and buries himself in her, as Ethel laments his shitty judgement. In his self medication used to mourn her passing, Ethel scolds, “When you protect the past you lose your future.” (Another season thesis? The last of the freak shows? The rise of tv?)

Of course, it’s not Ethel sitting there. Bitch is dead. It’s just another housewife and Jimmy is quickly shooed out. Poor women, how are they going to get their jollies now? Maybe they can keep phallating Sears Roebuck employees and get more free appliances…

No sooner does Jimmy stumble away does wonderful Dandy swoop in, using his wealth and good looks and refined manner to bait the housewives into letting him inside. Aaand that’s where we get the title, folks. Tupperware Party Massacre! Dandy killed the ladies who lunch and left them floating in an indoor pool for an insensitive husband to come home to.

Talking about coming into one’s own! Dandy no longer feels the need to hide his light under a bushel, and is now killing all the bitches he can.

In the opening scene of this episode, Dandy kills the neighborhood Avon lady, cuts off her head, and sews her head onto Gloria’s stiff, grey, beginning-to-decompose body. He creates his own Tattler twins and makes them his puppet.

The middle-aged marionette Dandy plays with was probably my favorite image this season. I could almost feel the weight of the women as he moved them about, and Gloria was almost certainly looking at Dandy the whole time. Just extraordinary.

Dandy’s scene with Regina was also really wonderful, as he tries to get her to take a bath with him the way they used to when they were children. (Except this time the bath is full of housewives’ blood. Doubtful this was the case when they were kids. But with Dandy I guess you never know.) He wants to tell her how it feels to be a god and take a life and bathe in someone’s blood. He wants to hear what it was like for her when she realized he was special. He wants a friend and someone to share his exciting new life with.

What is most fun about this scene (like most of Dandy’s scenes thanks to Finn Wittrock) is that we understand that Dandy really values Regina in a way that he doesn’t value any other life, human or otherwise. He even tells her he has no interest in killing her, because she is his “special family.” He’s not just reciting lines, he’s making us believe this guy’s batshit crazy motives. It’s remarkable how a show that has shown very little depth can create it in its ninth episode.

Unfortunately for Dandy, Regina has already gone to the cops and told them everything. When Regina shows up with a detective, you wonder for a moment if Dandy will finally be stopped. For a moment, his cockiness reads as hubris. When you think he’s just calling the detective’s bluff, you realize that he knows he’ll succeed. When he was screaming that he is above the law, beyond the law, that he IS the law, he was right. He dangled the prospect of a million bucks cash in front of the detective’s face and without a blink, dude shoots Regina. (For reference, one million dollars in 1952 is about nine million in today’s dollars. Well then.)

This rich detective then goes to the freak show and arrests Jimmy for killing the housewives. It’s a solid motive, really, since his gloves were left at the crime scene. But what it actually is is Dandy keeping his word to Jimmy when he told him, “I’m your god, Jimmy. I’m going to destroy you and everything you love.” And so far, he seems to be doing just that.

This episode is wonderful and annoying at the same time. Wonderful to watch, annoying because this is what this show COULD have been this whole season. It was compelling, it was fun, it showed us character’s motives in an effective way instead of feeding them to us with a spoon that looks like an airplane. Here’s to hoping the last episodes of the season will be as great as this one was! … though I kind of doubt it.

– This episode was directed by one Loni Peristere, who also directs an episode later this season. I’m inclined to believe the direction was what made this episode so effective, so hopefully they use him more next season.

– TWO BUTTS! There were TWO butts in this episode! YES!

– When Dot was imploring Jimmy to have sex with them, she said he was being given two souls, two mouths that were “devoted to you, pleasing you, always.” That seems to go against the very feminist foundation upon which American Horror Story was built. Perhaps that’s why it didn’t work for them.

– So Desiree is doing Malcom-Jamal Warner. Huh. If they don’t do something with him I swear this show’s cameos are just like name dropping. Equally ineffective and equally pathetic.

– I really really really really don’t care at all about Dell. He’s been a dick for half a season and his only redeeming quality is that he’s hiding being gay? I’m not unsympathetic to that kind of plight, but if maybe his character showed the people he’s done wrong some remorse or he actually tried to make up for the shitty person he’s become, maybe I could like him. The most interesting thing about his attempted suicide was Ma Petite and Ethel showing up and the fun POV shots as he was suffocating.

– Ethel in that scene has my favorite lines of the episode, on managing being a freak: “We manage it because we have to. We wear our shame on the outside, there’s no hiding it. But you, you carry your shame on the inside. You keep it trapped in there and it eats away at you, feeding on you like a living thing, till there’s nothing left but the rot.” Beautiful.

– Also, Ma Petite commanding him to sign his suicide note was really fun. Not just because she showed up, but also his signing it was like a death contract or something. This season could’ve used more moments like this.

– I STILL DON’T KNOW WHAT’S UP WITH STANLEY’S DICK. Are there two of them?! Is it freakishly small or freakishly large?! I don’t know because you can’t show penis on television! SOMEONE PLEASE TELL ME WHAT IS WRONG WITH IT.