Have you ever dug a hole so deep you wondered how you’d ever get out? Were you surprised when the obvious revealed itself, that the hole was your own grave, and as you dug deeper and deeper there was room for plenty more? When Bert Cooper said his epic goodbye to Don and to the world, he sang that the best things in life are free. We wanted to believe that Don had learned something from the last ten years, that he had grown mature and humble enough to actually heed the advice of a wizened elder, even if that advice boiled down to a fortune cookie wrapped in a Broadway melody. Bert was the least corrupted person to ever stroll the halls of SC&P, a sock-footed eccentric who lived a long, healthy life and whose good mood was only ever spoiled by the well-worn assholery of Roger and/or Don. Even without his testicles (h/t Dr. Lyle Evans) Cooper was the effective, moral patriarch whose guidance was possibly the only thing keeping the other partners from total self-destruction. Without him, the inmates have full run of the asylum.

In retrospect, the midseason finale (“Waterloo”) could’ve served as a fitting end for the series: the firm was saved, the partners were rich, Peggy had her moment with Don, all wounds were healed. Now, with the home stretch ahead, we find the partners in a sort of limbo where everything seems too chill to be very interesting. Apart from some ill-advised mustachery, the rakish boys’ club of SC&P is a mirror of its early ‘60s glory days. The prostitutes are plentiful, the Benjamins are disposable, and the casting calls are as boner-encouraging as ever. Don’s even loosening up about his miserable childhood, formerly the sorest of subjects in the Mad Men canon. Now, the upset to this equilibrium must come from the ghosts of a more recent past.

Rachel Katz (née Menken) certainly isn’t the first woman Don screwed over—that would obviously be poor Betty—but she was the first side piece who showed an interest in Don that went beyond the purely sexual. She loved the man incapable of loving anything save his own magnetism, and her appearance in Don’s dream (along with the news of her recent death) is a bit of the old “let’s remind Draper about the meaning of life.” As nice as it was to see Rachel again, we’ve been down this road plenty of times. Even forgetting Bert Cooper’s grand exit, who could forget the hash-induced death trip from season six’s “A Tale of Two Cities,” when PFC Dinkins (MIA, lol) gave us a lethal dose of beyond-the-grave anti-wisdom: “Dying doesn’t make you whole.” With Menken, the cryptic line from Don’s dream sequence—“I’m supposed to tell you, you missed your flight”—seems frustratingly tied to the theory floated by certain internet crackpots that Don Draper will turn out to be D.B. Cooper, the handsome gentleman who in 1971 hijacked a passenger aircraft, parachuted from the plane with $200,000, and was never found. I hate that theory, and I doubt Matthew Weiner would be dick enough to lead us down a seven-season primrose path to such an anti-conclusion, but what else is there to glean from Menken’s dialogue? The famously uninformative “scenes from the next Mad Men” hint toward a possible trip to Los Angeles, so we’ll have to wait at least until next week to see what this missed flight business is all about.

More interesting to me is the other bit of business in Don’s dream, when Ted Chaough suspiciously morphs into Pete Campbell. We’ve gotten more than our fair share of narrative out of these two characters, but at present they’re as vanilla as they’ve ever been. Ted’s happy to be back doing busywork, and Pete’s book seemed to slam shut with Trudy’s final words to him in “The Strategy”: “You are not part of this family anymore.” Could Ted’s return to New York lead to a similar future for him? His escape to L.A. was purely a misguided attempt to force himself to stay married; now that he’s back, he can’t avoid Peggy forever. It’s easy to forget that Ted is the last remaining partner to stay married, and as far as we know he’s the only one who’s never been divorced. (I’m absolving Jim Cutler of involvement in this conversation, as we know precious little about his past.) No relationship on Mad Men is stable—even Don and Roger spent an entire season in mutual loathing—so it isn’t hard to imagine Ted falling face first into the Pete Campbell playbook. By series end, he could very well be a broken man without so much as a bowl of Raisin Bran to soothe his pain. 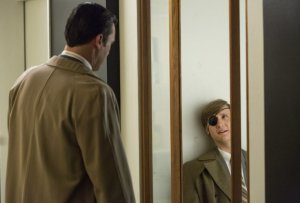 With the end so very nigh, the temptation arises to wrap up some minor arcs. Who among us predicted that the long-awaited midseason premiere would be so heavy on the Ken Cosgrove action? While Don and Roger ruin lives left and right and are rewarded with women and riches and inexplicably resilient livers, the artist formerly known as Ben Hargrove is a walking symbol of what this business really does to people. He sacrificed at least two of his nine lives to Chevy and was chastised for it. Even when he returned to New York for the first half of season seven, he was rarely seen and functioned mainly as SC&P’s heart of darkness, a perennially frustrated piece of loose furniture whose dream of writing the Great American Robot Adventure had gone the way of his right eyeball. Now he’s been fired for what seems like no reason at all, and he finds that writing was never his true calling after all. His real purpose in life was to finally stand up and exact revenge on the people who allowed him to be shot in the face. It would be great to see Kenny succeed as a writer, living on a farm somewhere like a more levelheaded Hunter S. Thompson, but that wouldn’t even the score. Ken’s new position at Dow Chemical might have given him a solid middle finger with which to sign off, but I sure hope he reappears in these final episodes as SC&P’s worst nightmare.

Meanwhile in the land of accounts, Topaz and their high-quality drugstore pantyhose are threatened by the emergence of Hanes Leggs. Hanes has the leg up (sorry) on Topaz not only because Hanes actually exists in real life (Topaz is an invention of the Mad Men writers’ room) but because their product is cheap, resulting in a massive outsell. Enter Team McCann, the newly appointed overlords of SC&P and representatives of Marshall Field’s. Even if Joan and her fellow partners are “filthy rich” from the McCann acquisition, nothing could be filthier than the minds and manners of the Marshall Field account team. This is an antidote to the notion that the McCann acquisition solved all SC&P’s problems; the money is great and everyone’s job has been saved (except Lou Avery, RIP?) but McCann appears to be comprised of the sorts of pigs that Peggy used to fire for breakfast. Every step forward results in two steps back; as far as the women of Mad Men have come in the last decade, it hasn’t stopped raining smug, misogynistic dickheads on Madison Avenue.

Speaking of smug, misogynistic dickheads, it looks like Harry “Mr. Potato Head” Crane didn’t storm out in a hissyfit after all. After finally nailing down the partnership that he undeservedly demanded for the better part of the series, the poor man’s Brian Wilson was beaten to the punch at the last second by the behind-closed-doors acquisition deal and all he got as a consolation prize was Bert’s old office. If Ken Cosgrove is the true face of Madison Avenue’s psychological torture, Harry Crane is its soul, a whining narcissist whose ass just cannot cash the checks written by his loud, stupid mouth. Of course Harry would never quit SC&P; he finally got Jennifer to stop talking about divorce! Perhaps that’s the real reason why he inherited Bert’s office: neither man has any balls.

The strangest part of “Severance” was not Don’s dream but Peggy’s date. Set up by, of all people, Johnny “No Relation” Mathis, the whirlwind evening with the handsome, unemployed lawyer seemed like a strange detour, especially for a show entering its final days. It’s rare even in earlier seasons for Mad Men to ever go the purely episodic route. The show has very few dead ends and even minor characters return in surprising scenarios (Freddy Rumsen, Paul Kinsey, Menken). Mathis’s buddy came and went without giving us much to chew on other than some light, speculative symbolism: Does the swapping of entrées mean that Peggy is tempering her Ayn Rand side? Does the discovery of the passport at the office mean that she essentially lives there, and that she can’t ever be spontaneous if she remains chained to her desk? In “The Strategy,” Peggy lamented having just turned 30, wondering if she had allowed the possibility of having a family to pass her by. The beautiful scene between she and Don sent the message that SC&P is her family; she’s called Stan her brother before, and now Mathis has taken the role of the invasive mother, setting up blind dates and checking in with a dumb smile on the morning after. Peggy might be lonely, but she’s made no room in her life for new relationships. When Stephen Sodheim said that he wished he had had children during his life, he amended his comment by saying that “art is the other way of having children.” Peggy is always caught between her art and her life; this narrative digression merely shows that it’s likely to be an ongoing struggle.

The situation with the diner waitress has Don acting out his relationship with Rachel Menken in miniature. Once again he uses a woman for reasons he can’t comprehend, only this time she tells him outright that his infatuation is meaningless and that she can’t give him whatever it is that he really wants. What I suspect Don wants—in this situation and in life—is an escape from the crushing totality of his sexual power. When he follows the waitress outside, all he has to say is, “I’m Don.” She mounts him immediately. She alludes to having been purchased as a prostitute by Roger’s hundred dollar tip, but the fact is that Don is libido incarnate. He can’t stop being immoral because he can’t stop himself from being attractive and charismatic. He’s a victim of his own positive attributes, which is why he can never be clean. It’s not that he doesn’t want to be Dick Whitman; he doesn’t want to be Don Draper. God (or whomever) made him desirable and persuasive, and his tragic flaw is his inability to reason with his own charms. If this were an English comp course, we could interpret Don’s abilities as symbolic of patriarchal society itself: he fucks his way into and out of every situation because he can. It destroys everyone around him because that’s how suppression works; it destroys him because, whether he likes it or not, he has a conscience. Like the song that bookends this episode, he wonders, “Is that all there is?” He knows it isn’t, but he has no idea how to prove it.